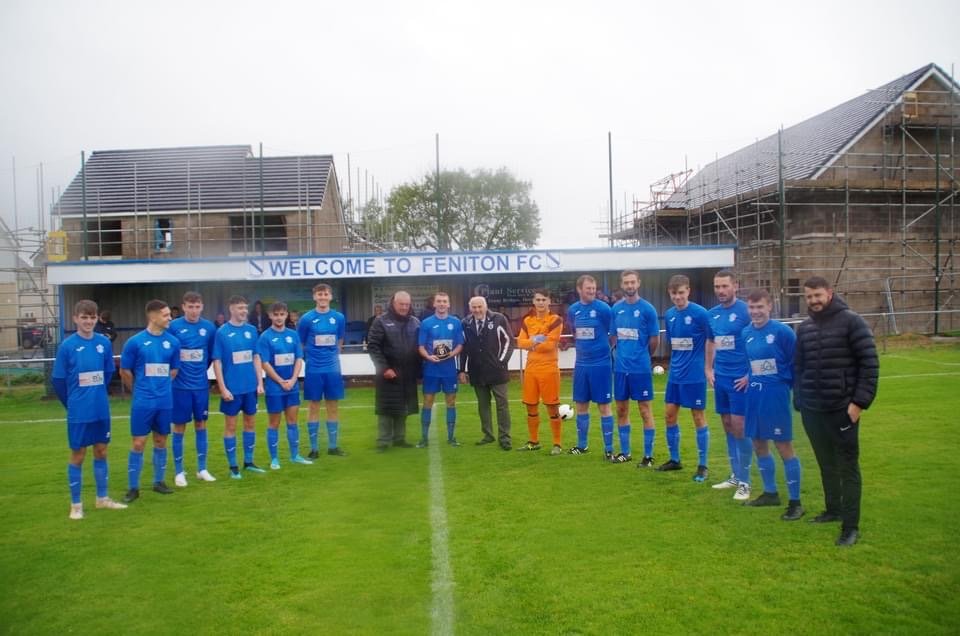 Feniton underlined their Premier East title ambitions with a startling 5-0 victory at home to Whipton & Pinhoe. Scorers were Cody Skinner, Gary Dixon, Morgan Pearce and a celebration double from Walsh who before kick off was presented with a special County FA Under 18 award by cups chairman Dudley Frood with Devon FA secretary Paul Morrison and chairman Bernard Leach there as well.
Dawlish United share top spot after claiming their third win but it was a much harder task against Seaton Town. Both Dawlish goals came in the first and last minute from Toto Whittle, but they leaked an own goal in injury time.
A Jake Richards hat-trick gave Colyton a 3-0 victory at home to Sidmouth Town, while over at Chard Town it finished 2-2 against Kentisbeare whose Josh Luxon and Aiden Howe found the net.

Lapford had to work hard to retain their Premier West leadership edging Exwick Villa 3-2. Although always ahead, Villa came on strong in the second half. Harry Leach, Dom Stapleton and Mark Tucker scored for Lapford.
The eye catching result was at Thorverton where they routed Bampton 7-2. Doubles from Kieran Smith and Josh Hole plus singles from Piers McLauchlin, John Vanstone and Sam Stewart did the job for the thors.
Chagford slipped back after being held at Alphington with a 3-3 draw. Franky Astill-Sheppard with another brace and Robbie Miller scored for the moormen.
Newtown came good at Hatherleigh Town 3-0 with Fergal O’Rourke, Beckham Pyatt and Ashley Mcdermid scoring but the match at Crediton against Winchester was abandoned after 78 minutes by the referee with Crediton leading 5-0.

2ND DIVISIONS
Axminster Town won 4-2 at Ottery St Mary to hold on to top spot in 2 East. Connor Swingler had both Ottery goals.
Cranbrook topped the scoring with a 10-0 drubbling for Axmouth United. Dan Mcdonald and Reece Saunders both managed hat-tricks.
Sidmouth Town beat East Budleigh 6-3 to retain second place, while Feniton clocked up their first win 6-2 at Pinhoe with Oscar Dennison claiming a hat-trick. Sam Bateman, Aiden Mitchell and Jake Turner also scored.
Bishop Blaize were 3-0 winners against Colyton thanks to goals from Charlie Caddy, Ross Caddy and Rob England.
It finished 2-2 between Millwey Rise and Exeter United. Tom Bastin and Nathan Wormsley with the home goals.

St Martins the early West leaders were held 0-0 by Devon Yeoman, but felt denied as they had two goals ruled out.
Broadclyst moved to within a point after a 5-1 win at Bampton. Dan Thomas 2, Reece Jordan, Lewis Breckenridge and Alvin Pollard scored. Joe Abrahams was man of the match.
Goals from Harry Tickner, Josh Tickner and Nick Dillon swept South Zeal to victory at Central 3-0.

3RD DIVISIONS
Just one game beat the weather in 3 East and saw Devon Yeoman pocket three points thanks to a single goal win against Upottery. Dan Libretto was the matchwinner.

New boys Falcons sit proudly as 4 East leaders although held to a 1-1 draw at Ottery St Mary. Tom Harrison with the home goal, Macauley Campbell for the visitors.
Bradninch and Lympstone shared a cracking 4-4 draw Lawrence Clark getting a hat-trick for the Ninch, Tom Rhodes the other scorer. Matheiu Piligry 2, Hayden Figures and Kiernan Tuffett replying for the Lympets.
Dawlish United came from a goal down to beat Millwey Rise 3-1. Richard Morgan, Dave O’Brian and Harvey Tootell-Morgan with the home goals, Luke Thirlow and Stuart King for Millwey.
Tom Sicklemore and Rob Chidgey found the net for Otterton 2-1 winners at Exmouth Town.